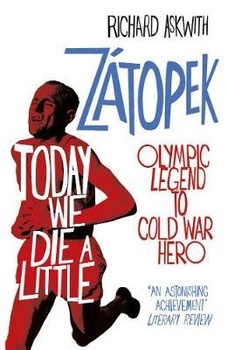 The definitive biography of one of the greatest, most extraordinary runners and Olympic heroes of all time, from the author of running classic Feet in the Clouds. On the track, his running made him a legend; off it, his charisma and humanity made him a hero. No runner has generated myth like Emil Zatopek, the Czechoslovakian soldier who revolutionised distance running after World War II. The minutiae of his victories and training methods, the poignant details of his generosity and downfall - all have been endlessly repeated and reinvented, but the full truth never told.

Zatopek won five Olympic medals, set 18 world records, and went undefeated over 10,000 metres for six years. He redefined the boundaries of endurance, training in Army boots, in snow, in sand, in darkness. But his toughness was matched by a spirit of friendship and a joie de vivre that transcended the darkest days of the Cold War.

His triumphs put his country on the map, yet when Soviet tanks moved in to crush Czechoslovakia's new freedoms in 1968, Zatopek paid a heavy price for his brave stance as a champion of 'socialism with a human face'. Expelled from the Army, he was condemned to years of degrading manual labour, far from his home and his adored wife.

Rehabilitated two decades later, he was a shadow of the man he had been - and the world had all but forgotten him. Based on extensive research in the Czech Republic and with unparalleled access to Zatopek's family and friends, particularly his widow, fellow Olympian Dana Zatopkova, Today We Die A Little evokes not just an extraordinary man but a glorious age of athletics and a dramatic period in European history.

It strips away the myths to tell the complex and deeply moving story of the most inspiring Olympic hero of them all.